What is the Payback From The Average Solar Energy System From YellowLite?

This post was originally published Feb. 20, 2017 and has been updated.

As a solar installation company based in Ohio, the first question our potential customers ask tends to go something like this: “Living in Ohio, are we going to see enough sunlight to ensure that solar is a worthwhile investment for our home?” To this, we answer yes! Despite the fact that our region experiences its fair share of precipitation, a substantial amount of the sun’s energy is available to power our homes year-round.

The second question our customers ask is ”How long will it take for my solar investment to pay for itself?” To answer this question, we’ll need to crunch some numbers. No two solar payback periods will be exactly the same, but we can find an average solar panel payback rate that can give you an idea of how long the process may take. 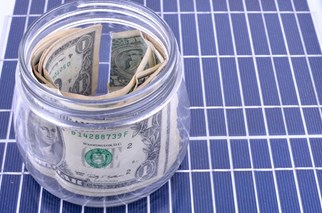 Your individual payback period, or break even point, will depend on a number of different factors, including your energy consumption, the price of energy in your region, the total cost of your installation and how you choose to finance the install.

We first start by assuming that the average American household pays around $120 a month for their electricity bill. Next, we assume a 4 percent increase in the cost of electricity. Third, we assume that the SREC market in the state of Ohio will remain steady at $15 for each SREC through 2028. Fourth, we will assume an average residential system that will offset around 75 percent of the average American household's electricity bill. This will mean an initial savings of $90 a month, or around $1,100 a year based on a rate of $0.1222 per kWh in the state of Ohio.

The average residential system size that we sell is around a 7 kW array, or about 24 panels. For this example, we are going to be using Canadian Solar 290-watt panels with just over 16 percent efficiency. We are assuming a south-facing roof with no shade, and an SMA string inverter.

Solar investors also benefit from special incentives created to encourage continued expansion of solar, governments at the local, state and federal levels offer a variety of cash rebates, tax credits, and other incentives. The federal government provides a solar tax credit, known as the Investment Tax Credit (ITC), that allows both homeowners and businesses to deduct a portion of their solar costs from their taxes. Through the year 2019, this will remain a 30 percent tax credit. With that tax credit applied, the average contract cost for this array is around $16,800. Based on these numbers, check out the following chart for an expected payback schedule: 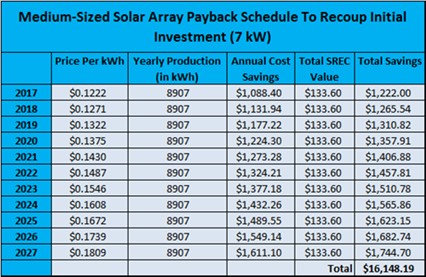 As you can see, the payback rate we get for a medium-sized system is around 10.5 years. After you recoup the initial contact cost, there is another 14.5 years to enjoy the electricity bill savings that a solar energy system can provide during the panel warranty term. From the latest research that we have reviewed, we think that the panels will last for 35-plus years. These are rugged, durable pieces of technology that are able to be installed in all weather environments.

So what about the rest of the warranty term after you have recouped your initial investment? Using the same assumptions for years 12 through 25, the total savings off the cost of a medium-sized system's electricity payback equal nearly $30,000 savings after you pay back the initial investment. The ROI based on an average system payback of $1,468 each year would be around 8.72% per year over each of the first 11 years. This is equivalent to a hot stock on the market. If you do decide to go solar, we recommend going larger because there are fixed costs involved and for each additional panel you decide to get, the payback rate is even better.

Of course, each scenario is different, so your payback return may be different than the average. If you reside in a region with higher electricity rates in comparison to other regions, your solar savings will be higher and your payback period shorter.

There are also some additional solar energy investment benefits that you may be able to use. Some states offer solar renewable energy certificates (SRECs) and performance-based incentives (PBIs). In Ohio, you receive one SREC for every 1,000 kWh of electricity produced by a solar system–on average, residential homes use close to 1,000 kWh per month.

Installing solar on your house is not only an economically positive action, it is an aspirational decision. If you are not already, be the first person on your block to go solar! Use our solar calculator for a quick estimate of your potential savings based on your unique needs and take the next step toward investing in solar energy.