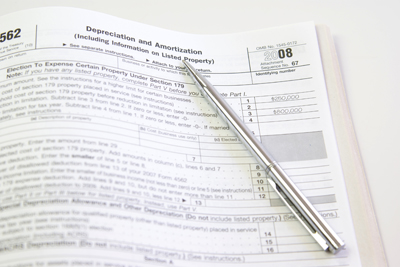 The old adage, ‘you must spend money to make money’ is undoubtedly true.  Happily, the Federal Government’s tax system is designed to accommodate you, in this respect.  It does this in many ways, but perhaps the most useful and most common would be through depreciation.  Any company or person engaging in business may receive a tax benefit over several years by depreciating certain goods purchased.

So, what exactly is depreciation?

Depreciation is originally an accounting term.  The idea of depreciation is to demarcate in accountancy the decline in value of an object in real life.  So, for example, tucks have what the I.R.S. calls a “useful life” of five years, which means if you buy a truck, the I.R.S. expects that you will expend the entire value of that truck over five years.  So, to accommodate that decline in value, each year the I.R.S. allows you to take a deduction for a portion of the value of that vehicle.

And what can be depreciated?

Most business properties you keep around for more than one year may be depreciated.  This means that while you cannot depreciate printing paper (that would be a business expense), you can depreciate furniture, cattle, your office building (if you own it), and even fruit or nut bearing plants.

But how does depreciation work?

The second step is yearly depreciation.  Here, corporations most often use what is called “accelerated” depreciation or “double declining balance” depreciation, which is contrasted with “straight line” depreciation.  It sounds very complicated but is actually exceedingly simple.

“Straight line” depreciation simply means you take the total value of the asset, and divide its value equally among each year of its useful life.  So, if you purchased a solar panel, you’d divide its value into fifths (or chunks of 20%), and would take one chunk each year as a deduction.

“Double declining balance” depreciation is only slightly more complicated.  There, you find the percentage you would take each year under the straight line method (again, 20% for solar energy assets), and double that percentage.  Each year, you take that percentage from the total remaining vale of the asset; until the last year of its useful life, in which you take the remaining value.  As an example, take a $14,000 solar energy installation.  Assuming you do not take the bonus depreciation, you’d take 40% (double the 20% under the straight line method) of $14,000, or $5,600.  The next year, the remaining value of the property is $8,400 and you take 40% of that, or $3,360.  And so on, until you’ve taken in depreciation deductions the entire value of the property.