Wind turbines and solar panels are both renewable energy sources that produce clean energy without the need for rare and expensive fossil fuels. Solar panels however, are a more realistic and practical option for residential and most commercial customers. According to the Solar Energy Industries Association (SEIA), there have been over 400 million MWs of residential solar panel systems installed in the United States so far in 2013. According to the American Wind Energy Association (AWEA), there have been about 18.5 – 30MW of residential wind turbines installed in the same time period. Solar has currently outpaced wind in the residential market and is expected to grow faster. There are a variety of reasons for this: Simplicity, lower maintenance costs, and better return on investment. While wind energy is and will continue to be a growing, renewable energy source – especially in power plant and utility-scale operations, solar will continue to dominate residential and small commercial markets.

A typical solar power system consists of the modules on your roof and the inverter, which is usually next to your electrical panel. That's it. 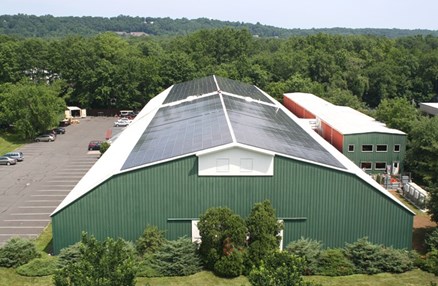 While the panels sit on your roof, they are producing energy for you and your family. With wind turbines, there's the frame or tower and the gear-shaft with the actual turbine at the head of the tower. Trenching is always needed to get the energy from the base of the turbine to your home.

With solar, it is possible to add onto your system in the future. With wind, you would have to install a whole new wind turbine. This is because solar is much more scalable than wind, meaning it's easier to increase the size of the system for solar because the basic unit is each individual panel. This allows you to add more panels in the future while still utilizing the same wires and inverter. With wind energy, the unit is a turbine that cannot be added to. For most homes, especially those in suburban areas, that isn't even possible. To get the 12mph wind needed for a wind turbine, it may have to be over 100ft tall rather than solar panels which are merely 3 – 4 inches off the surface of your roof. So zoning and permitting regulations may not even allow you to install a wind turbine on your property while solar is commonly installed without difficulty.

With solar panels, there are no moving parts. The solar panels produce electricity when light hits the surface of the semiconductor material. The "photo-voltaic effect" results and produces a flow of electrons from the induced voltage creating electricity. Wind turbines produce electricity from air currents and their aerodynamic design of the turbine's blades to "catch" the lift of the wind. This movement of the turbine requires lubricants and other fluids to maintain optimal operation. Because of this wear on the internal materials, maintenance will be needed. Solar panel systems can produce energy for over 40 years without any maintenance or replacement necessary.

If something malfunctions with a solar panel system it will not compromise the whole system. A new panel can be easily replaced. It only takes a few short hours to remove and re-install a panel, and then your system is up and running. With wind, problems will usually be internal and therefore will take significant time and effort to solve or replace the damaged component. Think about it, you'll have to have the installer come in with a crane to be able to get to the top of the tower and see what's causing the issue. And if it can't be repaired on-site, they may need to uninstall and send the whole turbine back to the manufacturer to get it replaced. The problem could be a metal bearing, a gear, a component within the actual turbine, or a variety of other issues that occur with small wind turbines.

Solar panels will even produce energy when it's cloudy outside. In fact, a study done by Mapawatt concluded that similarly rated (in power rating and cost) solar systems produced almost 5 times as much energy as wind turbines in the same area! That's because solar needs very little light to produce energy, whereas wind turbines need a significant wind speed to produce energy. To get the needed wind speed, turbines sometimes need to be over 100 feet tall. This higher energy production from solar is part of the reason that solar is the leader in residential and small commercial markets. Wind is exclusive to utility-scale and very large systems. Small turbines are less efficient and have a longer payback period than solar.

Another reason that solar has a better payback than wind is that solar increases your homes property value. Solar panels become an asset to your home and a recent study done by UC Berkeley showed that solar increases your homes property value at a rate of over $5,000 per kWdc of solar installed, whereas there's conflicting data on the effect of wind turbines on property value. Some studies show properties with a wind turbine on or within sight of a turbine have decreased property values due to the noise, obstruction of view and general unpleasantness of the large structure. Others show a negligible effect. However, with solar, it's crystal clear the system is an investment in your property, and will make it more attractive to potential buyers.