What Are SRECs And Why Are They Important To Ohio Solar?

An SREC is a Solar Renewable Energy Credit. One SREC is created for every megawatt hour (MWh) of electricity produced by a solar generator. SRECs are sold separately from the electricity they produce. This means that the solar energy system owner can use the electricity they create and sell SRECs to another buyer on an open market. The buyers are ultimately the utilities. 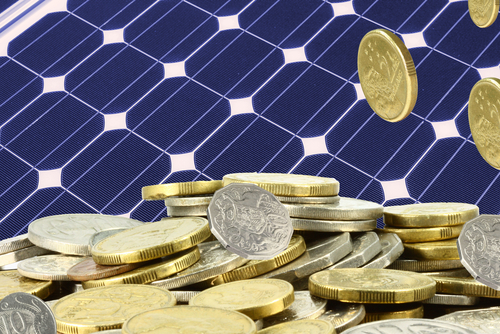 How are SRECs created?

The government mandates a Renewable Portfolio Standard (RPS) that is shaped by a number of policy positions including environmental policy most recently shaped at the federal level by The Clean Power Plan and financial free choice in electricity purchasing. The Clean Power Plan is designed to reduce the amount of pollution caused by carbon being released into the environment by power plants, in particular coal-fired power plants, and is more ambitious than previous environmental legislation. Standards for utilities have to be met by 2030. Most state RPS' are aligned with the goals of the Clean Power Plan. The basis for the Clean Power Plan is the Clean Air Act legislation that was passed in 1967 and amended several times by Congress since. For Ohio, the reduction in emissions is a 36% decrease from 2012 numbers by 2030.

So the state government guided by Federal policy creates the market for SRECs through the RPS with legislation that establishes how much electricity generation much come from renewables and solar. Now it is time for the Public Utilities Commission (PUC) that requires that the utilities provide proof that a certain percentage of electricity they provide to their customers has come from solar. The utilities do this by purchasing SRECs.

Electric utilities either purchase SRECS or they have to pay the Alternative Compliance Payment. See below chart for information on what the ACP is.

Can SRECS be held on to and bundled for sale at a later date? How Long can they be held on to, when do they expire?

In Ohio, SRECs are good for 5 years, but they do lose value. Once this five year period expires, if the SRECs are not sold then the value of them is zero since they have passed their expiration date. (This is a key link and should be taken note of: https://www.pjm-eis.com/program-information/ohio.aspx)

If you set up an account with a company such as Solsystems and have an active contract, the customer is required to report the SRECs. Solsystems does not offer holds on SRECs. They are sold each quarter.The contract language stipulates that failure to report SRECs could result in legal recourse by sol systems to make the customer compliant. Typically everyone reports SRECs, nobody holds on to them. In fact, in speaking with a Solsystems representative, she said that they have not come cross any violations of the contract in this way, ever.

If you do not have a contract with an aggregator such as Solsystems, you could hold on to them for 5 years and attempt to sell the SRECs yourself on the open market. This is probably a more difficult option, but one that is available.

State law is managed by PUCO on a day-to-day basis when it comes to SRECs.

The current and future prices of SRECs are determined in large measure by the state's Solar Alternative Compliance Penalty (SACP). The various states with an SREC program are not synched to the same exact value because states have different minimum requirements for SREC production based on their own particular Renewable Portfolio Standards (RPS). An SACP is:

"the fee a regulated entity must surrender in the event they do not procure a sufficient amount of solar electricity to meet their compliance obligation for their state’s Renewable Portfolio Standard (RPS) . An easy way to think of an SACP is as a price cap. If the SREC market functions properly, an SREC will not be traded at a price above the SACP, but can be traded at a price below the SACP. The SACP is defined on a state-by-state basis within the state’s RPS (or Alternative Energy Portfolio Standard for states like Pennsylvania and Ohio)." 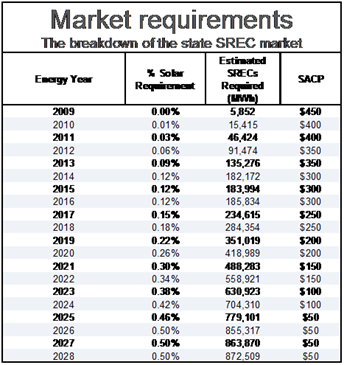 The value of SRECs will never rise above the SACP and are therefore going to be capped in value by a lower amount as time goes on. It would probably not be advisable to hold onto SRECs and wait for a better market since it most likely won't materialize.

When do they expire?

The current RPS, once it is reinstated from the freeze created by the passing of Senate Bill 310 in March of 2014, is set to expire in 2028. At that point, the best guess for SRECs is they will merge with the REC market.

What will happen to the RPS and the SREC market in 2028 and beyond?

It is impossible to tell for certain because of the current political climate globally, nationally, and at the state level. The best guess for SRECs is that they will merge with the REC (Renewable Energy Credit) market which is lower than the SREC market across all states. SRECs are higher-priced due to the solar carve-out stipulations in state RPS. Even if/when they merge with the REC market in 2028 they are not likely to increase in value. The current cap for the REC market is $45 per credit but in reality, the REC market is nonexistent. Most likely we will see the SREC market go the way of the REC market after 2028 and be worth nothing. However, twelve years is a long way away, and a lot could happen. It could in fact be a viable market. But the prediction here is that it will not be unless there are major shifts in thinking, policy, and economic conditions.

Because of the current legislative climate in the Columbus Statehouse, SRECs are most likely going to continue to be deflated in value in relation to higher performing states. This is not likely to change without a significant change in leadership and an accompanying change in policy.