In the United States, issues involving renewable energy generation have long been perceived to be simply an environmental concern.  But, as domestic oil reserves decrease and natural gas prices rise, our country continues to import a great deal of fossil fuels from overseas.  Trade agreements relating to these oil imports have, of course, sparked or escalated many conflicts in recent decades. 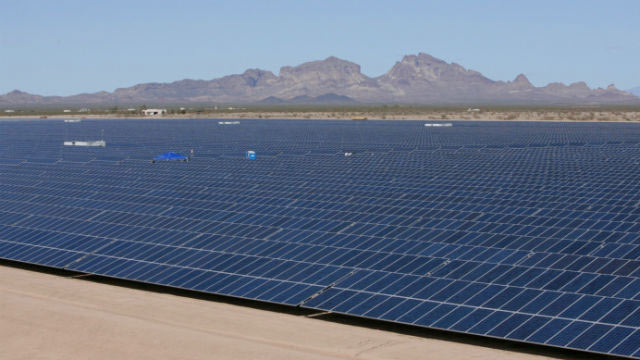 By expanding the renewable power generation capacity within U.S. borders, we can lessen our dependence on foreign energy sources and could avoid some of these clashes and confrontations.  With this being the case, solar power and other forms of renewable energy production have transcended the realm of environmental sustainability to become important issues for foreign relations and national security.  As a matter of national security, identifying and employing sources of clean energy are heightened concerns for the U.S. Department of Defense (DoD).

In 2015, the DoD has escalated its level of commitment to solar energy.  On August 13, the U.S. Navy announced the largest renewable energy purchase by the U.S. government in history.  Through a 25-year power purchase agreement, the Navy has committed to buy power produced at the Mesquite 3 solar facility in the Arizona desert.  The Mesquite 3 plant, a 150-megawatt array located 60 miles west of Phoenix, is on track to become operational in 2016.  The Navy plans to use this energy to power 14 military installations in Southern California.

While this commitment represents a significant action as part of the U.S. military’s quest to be more eco-friendly, it is not the only step being taken by the organization.  The Navy, and the Department of Defense as a whole have been very active in pursuing more solar energy options in order to power their operations.  A few other 2015 U.S. Navy solar projects are highlighted below:

In January, the Navy and Air Force commissioned three projects totalling 120 MW of solar power along the Gulf Coast of Florida.  Upon their expected completion by the end of 2016, the three facilities will become the largest solar installations in Florida, according to an article in Renewable Energy Magazine.  Gulf Power (the power company partnering with the Navy on the project) published an article on their website - in which Capt. Keith Hoskins, commanding officer of Naval Air Station Pensacola, expressed his excitement:

“This project will provide a potential benefit to the U.S. Navy in providing energy security during outages to allow seamless operation of our critical assets,” Hoskins said, in reference to the added resilience that solar power affords the Navy’s energy portfolio.

In April, the Navy declared its plans to lease 380 acres of land at the Joint Base Pearl Harbor-Hickam to Hawaiian Electric Co. for the development of a solar energy system.  The 50-MW facility will actually serve as a community solar program, in which residents are able to invest in the solar power station, which will in turn sell power back to the utility.

In July, the Navy signed a real estate outgrant with Georgia Power Co. for the development of PV panels at a base near the Florida-Georgia border.  The 30-MW facility will be constructed on 258 acres of land at the Naval Submarine Base Kings Bay.  Georgia Power plans to break ground on the project by the end of this summer, and expects it will be completed by the close of 2016.

In 2009, the Navy released its Energy Goals, which included the stipulation that 50% of the DON’s total energy consumption should be derived from alternative sources by 2020.  And, in 2013, President Obama ordered that 20% of the electricity used by all government agencies must be obtained from renewable sources by 2020.  Projects like the ones mentioned above reflect the Department of the Navy’s (DON) commitment to these target goals for becoming more environmentally sustainable.

Developing solar energy systems at naval bases provides an additional benefit to the military to go along with the obvious environmental advantages.  Many of the installed units will be serviced and maintained by Navy members, and instead of facing unemployment upon returning home - a very common occurrence among veterans - those with installation experience make themselves excellent candidates for the United States’ growing solar labor force.

The most recent agreement with the Mesquite 3 plant highlights quite a year of solar development for the U.S. Navy.  While it currently stands as the largest U.S. government’s largest solar purchase in history, I do not expect this record to stand for long.  Be on the lookout for the Department of Defense to continue its charge to promote renewable energy.  An increase in solar capability creates a broader, more resilient energy portfolio for the military, lesser dependence on foreign fuels, and serves as an invaluable stimulus for community investment in solar power.