The Future of Clean Fuel 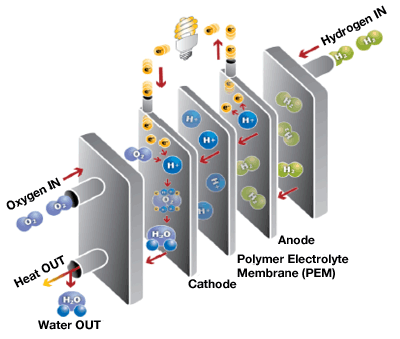 Burning a fuel that produces no pollution? For engineers, climatologists, and environmentally-mindful consumers across the globe, that’s been a pie-in-the-sky dream. However, hydrogen gas fuel cells present an opportunity that could actually make this dream a reality. The act of burning pure hydrogen gas (H2) produces no pollutants. However, this is only a partial solution at the present time - the energy needed to obtain pure hydrogen fuel is exorbitant. Unfortunately, hydrogen is rarely available in its gaseous form, and splitting apart other compounds to produce hydrogen gas requires a great deal of energy which, more often than not, comes from fossil fuels.

So, a question begging to be asked is, “can the H2 extraction process be completed with solar energy?”

The answer is “yes.” On July 17, 2015, researchers at Eindhoven University of Technology (located in the southern part of the Netherlands) published a significant paper. Their research showed a tenfold increase in the amount of hydrogen produced by using solar radiation to split water molecules. The key to the improvement was the use of a grid of semiconducting gallium phosphide nanowires rather than a more conventional flat semiconducting panel.

As mentioned earlier, the vast majority of hydrogen is found as a component of larger compounds, like water or methane. Currently, 95% of the hydrogen produced comes from natural gas reforming, a process in which methane (the main component of natural gas) is made to react with high-temperature steam. The end products are carbon dioxide and hydrogen gas. In order to create the proper conditions for the reaction to occur, the steam must be heated up to over 700°C. This need for a great deal of heat energy - in addition to the requirement of a large supply of natural gas - makes the energy costs for the reforming process quite high. As a result, there is an obvious need for other, more efficient methods for generating hydrogen gas.

The Science Behind Solar Water Splitting

The phenomenon of photolysis (using light radiation to split water) was first discovered in 1969, when titanium dioxide was exposed to strong ultraviolet radiation while underwater. This process was later termed the Honda-Fujishima effect, after the scientists who made the discovery.

In recent years, research has been on the rise for developing technologies that employ solar radiation in order to carry out this effect.

One method that has been used to accomplish this task is to connect a photovoltaic cell and battery system to the electrodes - the electrical conductors, submerged in water, where the water-splitting chemical reaction takes place. While this technique is currently the most efficient method of solar water splitting, it too is quite costly in relative terms.

More recent research, like that which is taking place at Eindhoven, focuses on the use of photoelectrochemical cells (PEC’s), which present a more direct, all-in-one approach. Instead of the two-step process mentioned above - where the PV cell charges the battery, and the battery powers the current through the circuit - PEC’s function as both the solar collector and the electrodes. The PEC consists of a semiconducting solar cell which is immersed in the water, providing a location where the following chemical reaction can occur:

Just like in any photovoltaic solar cell, electrons in the semiconducting material are excited (raised to a higher energy state) when sunlight strikes the surface of the PEC. Then, instead of being drawn through a circuit, the electrons are used to drive the chemical reaction shown above, which takes place at the junction of the material and the surrounding water. These reactions produce hydrogen and oxygen gas, which evaporate out of the liquid water and can be collected and stored for later use.

Please see the following links for more details on the water splitting process:

The PEC constructed at Eindhoven made use of a grid of gallium phosphide nanowires which are about 500 nm long and 90 nm thick. This approach resulted in a greatly increased surface area, which allows for more contact between the device and the water. As a result, more of the desired chemical reactions will transpire in a given time interval, producing more hydrogen gas. In addition to increased production, the use of nanowires instead of a solid panel decreased the amount of GaP material needed by a factor of ten thousand. Because gallium phosphide is a fairly expensive material, using less of it will drastically reduce the cost of manufacturing these devices.

The new system showed a 2.9% hydrogen yield, ten times greater than the team had seen when using a flat gallium phosphide panel. When compared to the 15% yield seen with the two-step, silicon PV cell-battery systems described above, this mark seems rather unimpressive. However, many researchers believe that PEC’s present a much better option for the future of H2 extraction - especially in terms of the cost per unit of energy produced.

While PEC’s may not yet be competing with natural gas reforming, or even battery water splitting systems just yet, the tenfold increase in output seen by the researchers at Eindhoven represents a noteworthy achievement. Their nanowire grid technique presents future research teams with a more effective and cheaper method for completing this extremely alluring task: producing hydrogen fuel at no environmental cost.