When considering solar and wind as major power sources, one of the main criticisms pertains to their reliability as consistent producers. In particular, critics point to how the production from these renewable sources is subject to the whims of unpredictable weather patterns. If the weatherman is wrong in predicting sunshine, a solar field will unexpectedly generate a reduced output. Proponents of fossil fuels argue a distinct advantage over renewables - that coal and petroleum can be burned precisely at the point of need, according to the electricity demands of consumers.

However, suppose that we could store energy from solar or wind sources, retaining a high percentage to call upon when a need arises. Improving this capability would greatly enhance the viability of renewable energy production, and allow us to reduce our dependence on fossil fuels. Thermal Energy Storage (TES) technologies provide this very solution.

Many people might not realize that electrical energy cannot be stored directly. Batteries convert energy between electrical and chemical forms. Thermal energy can also be stored. Recent developments in concentrated solar power (CSP) plants use the sun’s rays to heat a solid or liquid which can be stored in a tank and insulated, then release that thermal energy at the optimal time to generate electricity.

Concentrated solar power uses different scientific principles to produce electricity than photovoltaic cells, which are used for almost all household solar installations. Photovoltaic cells use a phenomenon known as the photoelectric effect, in which light striking a surface produces an electric current and voltage. Learn more on this in a previous YellowLite post. CSP plants, however, use the solar radiation to heat a fluid. This  is used to heat water in a steam turbine, which then powers an electric generator. A number of CSP plants have been constructed worldwide in recent years, including a few large-scale installations in the western desert regions of the United States where terrain and weather conditions allow for maximum production and retention.

There are two primary methods currently used in the capture of solar radiation, parabolic trough and power tower.

In a parabolic trough system, giant U-shaped rows of mirrors make up the solar field. The reflecting troughs are moved by a computer to follow the sun throughout the day in order to maximize the radiation collected. The parabolic shape of these troughs causes any incoming ray to be reflected toward the same center line. A small pipe is constructed along this line containing a heat transfer fluid. A heat transfer fluid, or HTF, is a fluid that is remains stable at high temperatures, and is used to absorb heat from sunrays and transport the heat to another location in the plant for electricity generation.

The power tower solar system (not the death-defying drop ride at Cedar Point) uses a large field of flat mirrors called heliostats to reflect the sunrays toward a receiver on top of a central tower. Similar to the parabolic trough design, the heliostats also track the sun’s motion across the sky for optimum performance. The central receiver contains a heat transfer fluid which is carried to the turbine in the same manner as the parabolic trough system.

As described, there are similarities in these two approaches. The primary difference is the presence of the central tower containing the HTF instead of pumping it out to each individual trough.

The main advantage of CSP generation systems is not in their efficiency for producing power, but rather their ability to store the thermal energy received and use it for power generation at a later time. This capability was demonstrated by the Gemasolar plant in Spain, which used TES to provide constant, uninterrupted power for 36 consecutive days. In order to achieve reliability to this scale, the thermal energy received can be stored in two different ways: sensible heat storage and latent heat storage.

Latent heat storage stocks thermal energy in the phase change of a substance—solid-liquid or liquid-gas transition. For example, when ice melts, there is some thermal energy that must be added to melt all of the ice before the resulting water begins to heat above 0 degrees Celsius.

A more in-depth description of heat storage mechanisms, as well as more information on the materials used can be found in this report, NREL (National Renewable Energy Laboratory).

Almost all CSP plants with TES capabilities use large insulating tanks to store the heated substance. In some cases, the heat transfer fluid from the solar field also acts as the storage medium. This configuration, in which the same fluid is pumped from the solar field to the tanks to the turbine is known as a direct system (see the figure below taken from the NREL report). In contrast, an indirect system utilizes a heat exchanger along the HTF loop, between the solar field and the storage tanks. By separating the storage medium from the fluid used for acquiring the solar heat, different materials can be chosen to optimize each of these two tasks. In smaller facilities, the amount of energy lost in the exchange of heat may outweigh the amount gained by using separate substances. In this case, a direct system may be a better option.

Storage systems with either one or two tanks are used in commercial plants. In the two-tank configuration, one tank contains the hot substance on its way from the solar receiver to the steam turbine, while the other contains the cold substance on its way back to the solar receiver from the turbine (see figure). During times with a lot of sunlight, the storage medium is heated and stored in the hot tank. When electrical power output is demanded, the hot fluid is removed from the first tank and used to power the turbine. After its thermal energy is used to create the steam, the now cool fluid is returned to the second tank until it can be heated again. 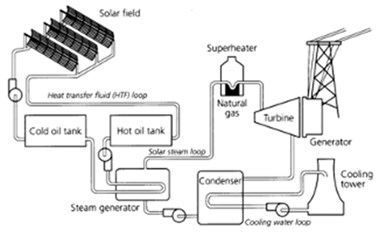 Single-tank storage systems use one tank to store both the hot and cold fluid. When the temperature varies within the tank, the hot fluid will rise to the top, while the cold fluid will sink. This creates what is known as a thermocline; a gradual change in temperature along a distance. To lower costs, the lukewarm middle part of the tank is filled with a porous solid. This design technique displaces the molten salt or other storage medium and allows the fluid to flow to either end.

The main advantage for the single-tank system is the limited costs associated with only needing to construct one tank. However, the drawbacks are related to the idea that the hot and cold fluids can mix. Limiting this requires an effective choice of the solid filler material (see this research done at Purdue University for more information).

In 2001, the Department of Energy launched its SunShot Initiative in order to set a goal to make solar energy cost-competitive by 2020. This effort has played an important role in the recent development of solar energy. In 2014, five CSP plants in the American southwest with outputs above 100 MW became operational, including Ivanpah, the world’s largest solar thermal power station. Also among these new plants was the Solana plant in Arizona, which is the world’s largest parabolic trough facility and is the first U.S. CSP plant to employ thermal energy storage See the U.S. Department of Energy’s 2014 CSP Report for more information.

According to the 2014 Renewables Global Status Report produced by REN 21 (Renewable Energy Policy Network for the 21st Century), the worldwide CSP capacity has increased by a factor of ten since 2004, to a total power output of 3,425 MW. Spain remains the leader in CSP production, accounting for approximately 2,300 MW of this total. In 2013, over 600 million dollars was pledged to support development of 1 GW (1000 MW) of new power production to Algeria, Jordan, Libya, Morocco, and Tunisia. Construction has begun on a 160 MW facility in Morocco and a 100 MW facility in Egypt. The availability of desert land and high solar radiation in the Middle East and North Africa make these prime areas prime for CSP/TES developments in the future.

Including Thermal Energy Storage capabilities in a solar power station gives the plant the ability to increase its output during times of higher customer demand - an objective that many previous renewable energy technologies have been unable to accomplish. While the total output of a solar power plant is still governed by the amount of sunlight falling upon the solar field, this added control over the output at any given time lessens the need for fossil fuels to maintain a stable level of electricity generation. The last ten years have seen a rapid increase in the implementation of this technology, and there is no reason to expect development to slow in the coming years.