Is Solar PV with Battery Back Up Feasible? 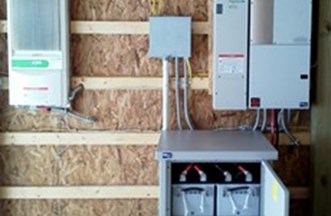 People are always surprised when we tell them that grid-tied solar electric systems turn off in case of a utility power outage. If a distributed generation system sends out power to the grid in case of a utility failure, the term is referred to as “Islanding”. Islanding can be dangerous for utility workers, who may not realize that a circuit is still producing power on the grid. For this safety reason, distributed generators like solar electric systems must detect islanding and immediately stop producing power; this is referred to as “anti-islanding”. Solar system inverters must comply with the IEEE 1547 standard which deals with grid-connectivity. So why would people get grid-tied systems? Well there are many pros to these systems too. Mainly they less are less pricey, electric grid is the backup at night and little or no maintenance is required down the road. On the other hand Battery Backup (BBU) systems require more sophisticated electrical design along with more labor, also batteries require maintenance and also they are expensive. So unless an uninterrupted power is completely necessary for some loads or the electric utility is not reliable and outages are common, BBU systems might not be a justifiable cost.

BBU systems have come a long way compared to a few years ago and are improving everyday with more and more companies competing with newer technologies. A leap frog forward would be improvement in the battery technology, so they can store more energy for longer periods of time. Like running a small to medium house with batteries is almost impossible with current technology. We are restricted to putting just a few amounts of circuits on batteries instead of the whole house if going the BBU route. This is another misconception; people think it’s possible to take the whole house off-grid by using batteries. But this is not a realistic approach with current battery technology, maybe if it’s a one room cabin then.

The next step would be to figure out what are the most important circuits or loads that would need to stay powered up in case of an outage. The least amount of circuits the better it would be, for your pocket and for sustainable output from the batteries for a longer time. The best way is to put essentials like refrigerator, stove, some lights, and some outlets on the BBU system. Then deciding on for how long would they need to stay powered up in case of an emergency outage situation, referred to as “days of autonomy”, going more than two days is not recommended. After we know how much energy would be needed, then we can put together a battery pack for those needs.

Two sources would charge the battery pack, solar panels and the electric grid. If the batteries are fully charged then the solar panels will behave like a grid-tied system and send their energy to the homes electrical panel. Or back to grid if they are producing in excess of the homes needs. In case of an outage, the batteries will seamlessly start powering the loads we put on them and solar power will start charging the batteries. Now if it gets dark then there is no way to charge the batteries and they would keep on depleting. To counter this problem, some people include a generator as a second backup. So if the batteries deplete to their lowest point, the control system would turn on the generator to charge them up and turn it off after they reach a certain charge point. This saves fuel because the generator doesn’t have to run through the complete outage.

In conclusion, our recommendation would be to go with a smaller battery pack, if adding a battery backup system to your PV system. Fewer batteries have many benefits, less cost, they charge better, cheaper to replace in a few years, etc. Also try to store them in a climate controlled area that also helps with longevity. The above facts and figures are just some light shed on complex subjects, if things are done with proper deliberations and planning BBU systems are very much feasible.

If you have any questions about your existing battery back up, or would like to learn more about solar power, contact us at YellowLite, and we can find a solution for all of your solar needs.