Solar Impact: Paying Back The Environmental Cost Of Production

Going solar is a win-win situation for you and the environment. When you install solar panels, you’re benefiting from the Sun’s natural energy while saving up money on all those hefty bills. There’s also another huge benefit: you’re contributing less towards polluting the climate and the health issues that come with consuming traditional sources of energy.

Solar panels are a way of benefiting from nature while also giving back with zero energy emissions that are harmful to the environment. Let’s discuss how solar impacts the environment. 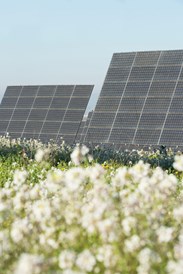 Let’s talk about the statistics first.

This means that solar impact on the environment is good because of its lesser harmful emissions. But what about the solar panels? Are the panels or their manufacturing also environmental friendly?

Let’s have a look:

Solar Impact of Panels on Environment

With advancements, manufacturers are looking for ways to make solar panels more efficiently. This means that solar's EPBT will continue to decrease. For example; in the past 10 years, there has been a 62 percent decrease in the amount of material used for silicon cells, all thanks to increased efficiency and thinner designs. This decrease means that less energy is spent processing silicon during the manufacturing process. With time, more solar panels will retire and recycling them will become more cost-effective and efficient. This will further reduce their EPBT.

On top of that, it’s important to remember that solar panels can generate energy for 25 to 35 years. For the average homeowner, going solar is like eliminating the emissions created by a car that drives 18,000 miles per year – another environmental benefit. So, while the environmental solar impact of solar energy is greater than zero, its overall benefits far outweigh its costs.

Paying Back The Environmental Cost of Production:

After everything is said and done, how do we give back to the environment? There’s one main way of establishing a short energy payback time and longer solar panel life.

Other than the statistics and long energy payback time, there are the unconventional and natural methods of paying back. For small-scale productions like home-based solar systems, design changes in their homes is also an option. This way one can have a greener home while also utilizing solar energy.

There can also be a new industry that deals with the old, discarded or broken panels. More research in this area can lead to quicker payback to the environment.

Let's say that the environmental impact of solar energy is minimal. You should check how different companies manufacture their solar panels. By comparing options from other solar companies, you can find the best package deals. Get an instant estimate or get in contact with us at YellowLite to learn more about solar panels today.