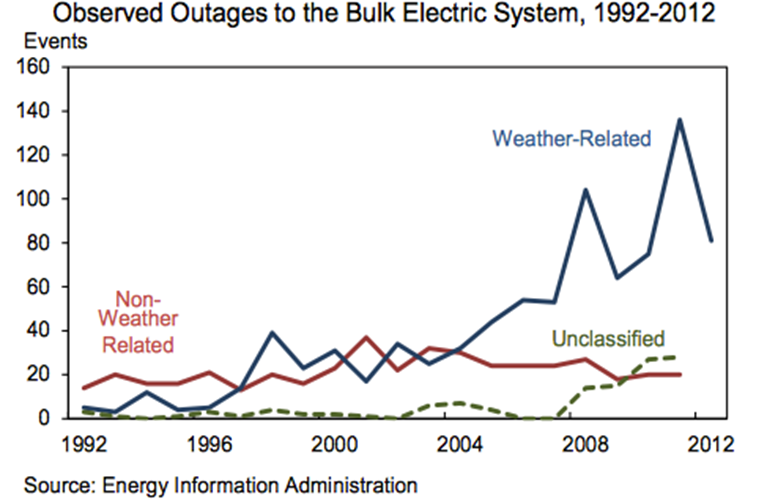 Many of us view a power outage as a mere inconvenience, an annoying aberration. While having to navigate your hallway by candlelight or entertain yourself without Netflix for a night may seem traumatic, these relative nuisances can be categorized as your typical “first-world problems”.

However, for many people who require electricity for mobility devices, medical equipment, and refrigeration, the loss of electricity can be life-threatening. In the wake of 2012’s Superstorm Sandy, more than 8 million people in the Mid-Atlantic and New England were left without power, a great many of whom were economically and physically disadvantaged. Weather around the globe - like Category-5 hurricanes, drought-fueled wildfires, and sudden ice storms - continues to increase in its severity, and therefore will escalate as a major cause of critical power outages. As climate change makes these violent weather events increasingly common, people lacking viable support and backup systems could be in grave danger.

However, there are ways to address and mitigate the crises - and solar-based energy systems might be a critical facet to the eventual solutions.

Solar power generation, connected with battery storage, has clear attributes for providing energy to overcome cataclysmic events. Possessing capabilities for constantly generating electricity, as well as for storing excess power for on-demand use, “solar+storage” systems can provide reliable power for critical loads during an unforeseen outage. However, the economic feasibility of having these installations in place - both for regular and emergency usage - concerns many building owners and developers.

To cite one important study: in an illustration of the financial, environmental, and general welfare benefits of solar+storage in low-income housing developments,Clean Energy Grou has published a report entitled Resilience For Free as part of its Resilient Power Project initiative.  This report is the first of its kind in history, providing in-depth economic analysis on solar+storage for low-income housing in an attempt to help encourage developers and property managers to consider these installations as very practical long-term solutions.

The Resilience For Free report illustrates a range of cost-effective opportunities for solar+storage installations in affordable housing throughout the country. The analysis shows that these types of systems will more than pay for themselves within their shelf life in electricity markets across the United States.

Clean Energy Group’s (CEG) Resilient Power Project takes a multifaceted approach to decreasing vulnerability in the nation’s power grid. CEG helps to educate states and municipalities about financing options, and seeks to connect public office to private industry in order to help incorporate the latest technologies into the community. Through these relationships, connections, and communications, the Resilient Power Project hopes to foster a working network of people across the country that can educate one another on strategies to create more reliable power systems.

While environmental responsibility is an important consideration in site planning, owners and developers obviously always consider return on investment as an important aspect of property management.  The analysis performed in Resilience For Free specifically examines the economics of different types of solar installations on low-income housing in three major U.S. cities: Chicago, Washington D.C., and New York. While market regulations and incentives can clearly vary across different regions, the report shows that solar+storage systems can be installed for no net cost over the lifetime of the project, with payback periods as low as a few years in some cases.

Profit projections were made under the following assumptions, paraphrased from the report:

The main value for storage capabilities on solar systems is to power critical building loads while the grid is down, which continues to happen more and more. The figure below, taken from a 2013 Department of Energy report, shows the increase in weather-related outages between 1992 and 2012. This report also states that 7 out of the top 10 costliest storms in U.S. history occurred between 2008 and 2012. In addition, people in the Midwest may be even more vulnerable. Another report, published by Climate Central, showed that between 2003 and 2012, Michigan led all states in weather-related blackouts, with Ohio at #3 and Pennsylvania at #4.

These statistics show all the more why solar+storage is a necessary component in a resilient power network. The current standard for backup power is the diesel generator, but these can be prone to failure, which occurred frequently during Hurricane Sandy. These generators sit idle for the majority of the time, and are often inadequately maintained; as a result, they are prone to failure when called upon. During an extended outage, there also may be issues related to transport of replacement diesel fuel.

Since solar+storage systems are always in use, their regular maintenance allows them to be online when disaster strikes. Also, the need for battery storage is a crucial factor in allowing these systems to serve backup needs. Most grid-tied standalone PV systems (no battery) are configured to shut off when the grid goes down for safety reasons (electric current may flow “upstream” and harm maintenance and repair workers along the power lines).

While the grid is functional, solar+storage systems are constantly generating power, and therefore also providing potential revenue. The following list examines some common ways that these systems can produce significant savings:

The Resilience For Free report shows that residents of low-income or elderly housing should not have to wait for the benefits of solar systems with battery storage to trickle down to them. Rather, this technology should be employed today. Solar+storage installations present not only a safer, cleaner, and more reliable power source during outages, but serve as a cost-effective power producer throughout the year. As severe weather continues to be something we must contend with, these systems are an important implementation for any developer to consider.

Recommended Reading: links to other YellowLite articles on battery storage

A 2015 Look at Residential Energy Storage

Why Are Batteries So Important to the Solar Industry?