The history of renewable energy in Ohio dates back almost a century if you include hydroelectric power. For wind energy and solar energy systems, the story can be written over less than a decade. Favorable policies and incentives, as well as large investments in technology, have created a booming worldwide market especially for solar PV. Some are saying 2016 could be a critical year for maintaining the momentum for renewables in Ohio. So it merits taking a look at the big picture and the implications.

One thing is clear, with the level of participation by homeowners, businesses, and utilities alike, renewable energy is thriving in the state. Taking a quick look at the current status of the industry and the key policy action required this year, it is possible to conclude the future is just a bright.

While some states can tap vast quantities of dammed-up water to churn megawatt upon megawatt of clean power, Ohio’s renewable energy options are mostly limited to wind and solar power. For this reason, the state ranks low in the net electricity production from sources outside of fossil-fueled plants and nuclear plants. For example, while California is widely recognized as the leader in the solar energy and wind energy fields, states like Idaho and Washington have the highest cumulative production by a decent margin. In the Pacific Northwest, there are many hydropower facilities, some of which are very large. There have been moments when hydropower output was the primary source of electricity in the entire region.

In Ohio, less than 130 MW of hydropower is in the mix. As recently as early 2015 according to the SEIA (Solar Energy Industries Association) there was over 100 MW of solar energy generating capacity in the state. So this year it is expected solar will surpass hydropower as a more significant contributor to the renewable energy output.

Since starting at near zero around 2005, solar and wind energy production has progressively increased each year to exceed this 100 MW mark. Where nationally renewable energy delivers over 13% of the overall electricity capacity, solar struggles to exceed 1% of the total. In Ohio, it is estimated that 1.5% of the total demand is met by solar.

Some Key Signs for Ohio Renewable and Solar Energy 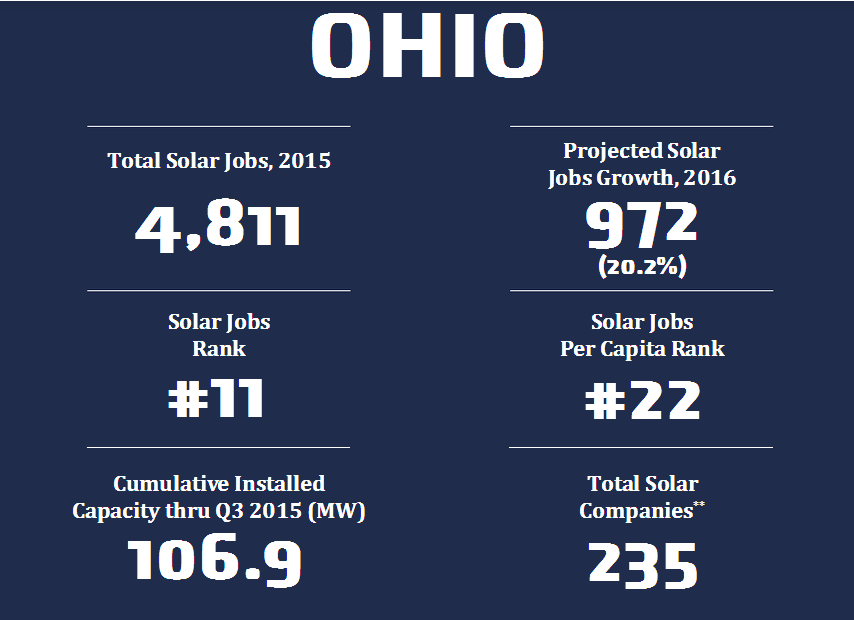 The economic impact from investment and employment is booming. As more people are directly engaged, their political clout increases. According to the Solar Foundation, the industry is responsible for nearly 5,000 jobs of which almost 3,000 people are engaged in all aspects of installation. Much of that is a result of homeowner and small business activity, even though large and utility scale projects are a significant part of the total installed capacity.

Large companies, especially in the tech sector, are increasingly bypassing their utilities to directly purchase renewable power from third party developers. Companies like Amazon, Apple, and Facebook have stated they choose to locate facilities in states where renewable energy is available and where renewable energy projects are easy and sensible to complete. One that will impact Ohio, Amazon has been aggressively investing in both wind and solar, supplying in excess of 40% of the demand for its data and distribution operations with clean energy. It is on a path to reach 100% reliance on renewable energy in the future. It is locating three data centers in Ohio just for starters.

The company has chosen a number of sites across the U.S. to build out its plan. Sites are chosen for a variety of economic and environmental factors. A mix of wind and solar installations are important to the company so that not all of their supply is from a single source.

In Virginia the company plans Amazon Solar Farm US East. It is an 80 megawatt (MW) solar farm on the eastern shore of Virginia. It is projected to deliver about 170,000 megawatt hours (MWh) to company data centers.

In Ohio the company plans Amazon Wind Farm US Central. It is a 100 MW wind farm in Paulding County, Ohio, expected to deliver approximately 320,000 MWh of wind energy annually starting in May 2017.

In nearby Indiana the company plans Amazon Wind Farm (Fowler Ridge). Is is a 150 MW wind farm just completed in the northwestern corner of the state. The site is expected to generate nearly 500,000 MWh of electricity a year.

Campbell Soup is another company that is very proud of setting a solar trend in Ohio. They received a Green Plant of the Year award for plant improvements in Napoleon, Ohio, that include a nearly 10 MW solar energy system installed in late 2012.

The Most Important Event for Ohio in 2016

In 2008 a Renewable Portfolio Standard (RPS) was enacted to facilitate the growth of renewable energy installations across the state, targeting 12.5% by 2026. In June of 2014, the RPS and efficiency standards were both frozen for two years through Senate Bill 310. This was done ostensibly to allow a legislative committee to review the standards in light of preceived industry changes. Since September of 2015 the current governor of Ohio, John Kasich, has called for legislators to take action and not continue the freeze. And while campaigning for the presidency in January outside of Ohio, he clarified his commitment for the state to refresh its goals for solar energy and wind energy development.

The good news for renewable advocates is that either a new plan must pass, or the freeze is automatically lifted. And then the state reverts to the original policy.

We will be watching this closely especially as the midyear deadline approaches. Keep checking for updates.

There are a number of positive indicators for a thriving solar industry in Ohio as we list above. In addition, we have shared the great news about the extenstion of the federal Investment Tax Credit (ITC) through 2019. There is proof that current pricing is favorable to the buyer for residential solar and rooftop solar.  Local programs here and in neighboring states indicate a commitment to renewable energy, even with the complications for Ohio from the RPS freeze.

Most importantly, after nearly a decade of data collection, there is strong proof that installing a solar energy system increases the appraised value of your home. At Yellowlite, we have a very positive outlook for 2016. And we hope many Ohioans will see it that way, too.