Future of Solar Energy- Will It Save The World?

It’s natural to worry about humanity’s long-term future. At our current rates, our primary sources—oil, coal, and other fossil fuels—will completely run out by the end of this century. Science fiction authors have often prophesized a global dark age catalyzed by “Resource Wars,” as superpowers fight for the last remaining drops of fuel. Think of the desperation of a post-apocalyptic movie like “Mad Max” or “The Road.”

Such fears are not unfounded. From the first fires thousands of years ago that used wood to cook food, to steam in the 20th century that fueled ships, to the colossal power plants across the world that support a planet of seven billion, the foundation of civilization has always been energy. It turns the lights on, refrigerates our food, fuels our transportation, facilitates communication, and promises our future in the stars. In fact, the Kardashev scale, devised by Russian futurist, measures a civilization by its ability to harness energy—first from its planet, then its sun, then its galaxy.

If we ran out of energy, society would collapse overnight. That’s a scary thought, but it’s not probably going to happen. Renewable energy sources grow every day—the Department of Energy predicted that the U.S. will generate most of its electricity from renewable energy by 2050. However, there is much debate on which renewable energy is best, between hydropower, geothermal, solar, wind, and others.

We here at YellowLite believe that the future of solar energy is bright and it is the energy of the coming times. But don’t take it from us—the International Energy Agency (IEA) believes that solar will be the world’s largest source of electricity by 2050. Let’s explain why solar is essential to humanity’s long-term future.

The Advantages of Solar Energy

Each form of energy has its pros and cons. Nuclear energy, for example, produces clean power but has proven to be unstable and even dangerous. Solar energy has many advantages compared to its alternatives. Here are a few:

As long as the sun is shining—and it will for a few billion more years, we will have solar energy. The amount of solar energy hitting the Earth at any time is massive: the sun hits Earth with nearly 500 exajoules (EJ) of power every hour, which is more energy than the world uses in an entire year. All we have to do is capture it.

On the map below, if each tiny black dot was filled with solar panels, the world’s energy needs would be fulfilled instantly 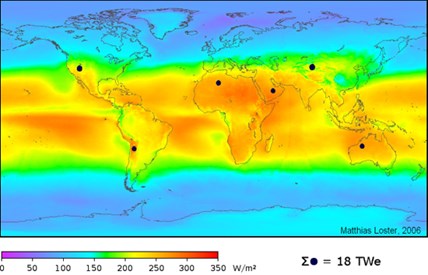 2.Solar energy is safe and simple.

Nuclear energy can cause meltdowns. Coal requires dangerous working conditions. Even geothermal and hydropower are massive engineering projects. Solar energy, however, requires no moving parts and is extremely safe. It’s remarkable that a silent, self-contained solar module can generate electricity for decades with little to no maintenance.

Additionally, contrary to popular belief, solar panels can be placed anywhere in the world. In places farther from the equator that receive less sunlight per day, cooler temperatures actually increase the voltage of each solar module.

Solar modules have consistently gone down in price every year since 1999. In fact, this phenomenon has been codified in Swanson’s Law—the observation that the price of solar tends to drop 20 percent for every doubling of cumulative shipped volume. At present rates, costs halve about every 10 years.

The Future Of Solar Energy

The future for solar energy is extremely bright (no pun intended). Solar energy was the fastest growing energy source in the world last year, according to the International Energy Agency. Although it provided just over 1% of the world’s total power, it grows by about 33% annually. By 2060, the IEA estimates that solar power will provide a “third of the global final energy demand.”

The next big hurdle for the solar industry is for panels to become cheaper than fossil fuels. Many experts are predicting that this will happen soon—the Institute of Electrical and Electronic Engineers says that solar energy will become the “most economical form of electricity within the decade—but only if the solar industry continues to rapidly improve solar cell efficiency and create economies of scale.” Thankfully, we see new innovations in solar energy frequently. For example, in 2018, many in the industry are buzzing about new, ultra-cheap perovskite cells.

How Can You be a Part of the Energy Revolution?

There is a way to join the energy revolution. While you can’t produce nuclear power in your backyard and likely don’t have the property to build a wind turbine, anyone with a home and a roof can install solar panels.

Going solar will have an immediate, measurable impact in helping the environment—your power plant will notice the reduced demand and decrease their production accordingly. Your home will generate its own electricity, often producing enough to completely negate your family’s carbon footprint. In best cases, your panels will actually send energy back to the grid. In many states, this excess power will lead to the utility paying you in a policy known as net metering. The best time to get solar panels is now—the federal tax credit, which subsidizes 30% of your solar system, will begin incrementally diminishing at the end of 2019.

Solar energy will always be available to humans. Even if we have our growing pains in transitioning from non-renewable to renewable energies, given the rapid yearly growth of solar and other renewable sources, we feel confident in humanity’s future.