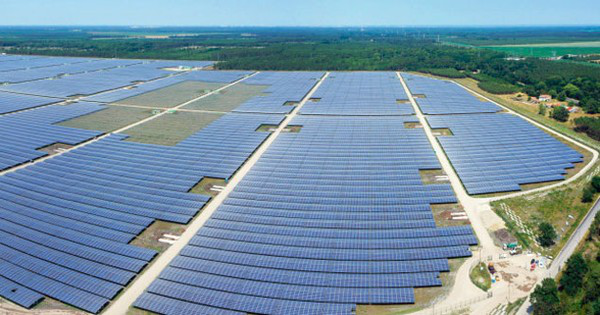 On December 1, 2015, representatives from over 190 countries gathered in Paris for the beginning of the 21st Conference of Parties (COP21), a two week-long international forum for reviewing the United Nations Framework Convention on Climate Change. With more than 25,000 official delegates present for the event, the nation of France was proud to unveil its latest grand implementation of solar power.

The Cestas solar park, located near Bordeaux, was inaugurated on December 1 after coming on line in mid-November, and became the largest solar power plant in Europe. Twenty-five 12-megawatt sub-plants cover an area of over 250 hectares (slightly less than one square mile), which together make up the entire facility. Neoen, a renewable energy company based in Paris, developed the project, with the solar panels being supplied by the Chinese company Yingli.

At 300 MW, the Cestas park has almost double the capacity of Germany’s Solarpark Meuro, which was previously the largest solar power station in Europe.

The project cost €360 million ($382 million), and will be selling energy for €105/MWh ($111/MWh). This price is slightly higher than average French electricity prices of about €97.73/MWh, but is notably less than the government-guaranteed €130/MWh cost of power from the Hinkley Point nuclear station currently under development in the U.K.

In order to optimize the generation of energy, the panels in the Cestas park are oriented in a somewhat novel manner. Most solar arrays in the Northern Hemisphere are slanted to the south so that the difference between the angle of the panels and the angle sun’s rays stays relatively small throughout the year. However, the developers of the Cestas array have adopted a different strategy. By positioning the panels facing both east and west rather than south, the maximum power output always occurs during the early morning and late afternoon, coinciding with the country’s peak hours of electricity demand.

Developments like the Cestas park reflect a significant commitment by the French government towards increasing France’s solar production. According to the IEA’s annual Snapshot of Global PV Markets report, France ranked 6th in the world in terms of installed solar capacity after 2014. However, among the world leaders at the time of this report, France’s 5.7 GW of solar energy capacity is somewhat overshadowed by neighbors Italy (18.5 GW) and Germany (#1 in the world at 38.2 GW). While France currently still sits behind these solar pacesetters on the international stage, the country is drastically outperforming even its own expectations, and anticipates that the current 5.7 GW capacity will continue to increase at an impressive pace.

Earlier this year, the French government updated its national target goal to 8 GW of installed solar capacity by 2020, after an initial goal of 5.4 GW was surpassed far ahead of schedule. The French Parliament also passed a law in March 2015 requiring the roofs of all new buildings in commercial zones to be partially covered by either plants or solar panels.

Developments like these indicate France’s continued commitment toward the solar energy industry, and hopefully mean greater things are on the horizon. The opening of the Cestas park represents not only a major step forward for the nation of France, but a continued raising-of-the-bar for solar energy in the entire European Union. With nations like Germany and Italy leading the way in terms of commitment to solar energy as a viable source of power, a little bit of competition from the neighbors should only continue to drive the industry forward.