Columbus Gets More Sun During the Summer Than Miami?

How Much Sun does Columbus Have Compared to Miami?

Sunshine is the lifeblood of our business. So when it comes to sunshine, we all know that California gets the most sun in the country. 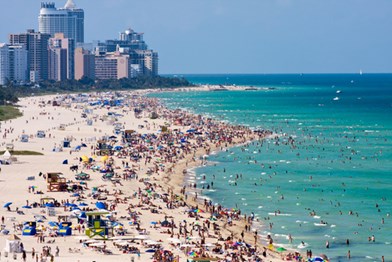 And of course the further south you go, the more sunlight you are going to receive. Where does Columbus rate in comparison to our sunny neighbors to the south and southwest? Did you know Columbus gets more sunlight during the summer than Miami?

Let's look at the NREL PVWatts Calculator and take a look at Miami, Florida and Los Angeles, California, two glamorous, sundrenched cities and see how much more sun they truly get than Columbus.

Some of the big numbers are not surprising. We knew that Miami would average more sunlight per day than Columbus and we had a feeling that Los Angeles would have a little more than Miami.

What was unexpected was the extent that Columbus gets more hours of sunshine during the summer than Miami, besting Miami in May through August:

In fact, Columbus gets 2.1% more sunshine than Miami during the summer months. Who would have thought it?

If we ignore the winter months let's see how the results stack up:

In fact, for eight months out of the year Columbus gets 92.0% of the sunshine that Miami gets. It's when we get to the winter months, from November through February that the difference is truly apparent and solar panels are not getting quite the sunlight. During the winter, Columbus gets 52.9% as much sunshine as Miami, roughly half. Solar works well during the winter, the cold actually makes the panels a little more efficient since there is a decrease of electricity loss. Solar panels for homes work well in the winter. However, look at the results:

The winter months are where the difference between the two cities becomes apparent, and it is quite a large discrepancy. But we shouldn't just think of solar as working during the summer and not working during the winter. Yes, Miami gets more sunlight over the course of the year, but Ohio gets plenty to make solar economically viable over the course of the year. Another comparison we should make is between Columbus and a city in the European capital of solar.

Germany has the second most solar installed of any country in the world at 40GW, providing approximately 6.5% of their total electricity needs, and the most solar per capita in the world of any country. (Solar panels provide just about 1% of the America's electricity generation.) The  largest city in Southern Germany is Munich, let's compare Munich to Columbus by average sunlight:

Columbus receives 23.7% more sunshine than Munich throughout the year and bests Munich in every single individual month. This shouldn't really be surprising either since Columbus is at a 42 degree northern latitude while Munich, in the south of Germany, is around 48 degrees northern latitude. We used Munich in the example because it is the southern most big city in Germany and gets more sunlight than Berlin or any other major German city. If solar works in a country like Germany, it certainly will work here, since we get a lot more sunshine than Germany, nearly an hour more each day.

So what should we take from these numbers? One interesting parallel is that there is as wide a gap in percentage of sunshine between Miami and Columbus as there is between Columbus and Munich. Solar works in Miami. Solar certainly has been proved to work in Munich. Solar works in Columbus. Solar works in all of Ohio. Ohio, as part of the Great Lakes Region gets as much sunshine as twenty other states and is within one hour more per day of twenty-three  more. What does that mean for solar? It means there's plenty of sunshine to power your home, power your business, power your community in the state of Ohio. Solar panels for your home is a good investment as solar panel costs have decreased dramatically. Solar panels in Columbus, Ohio are therefore a great investment.

Let us know what you think. Take a look at our website. Send us an email at info@yellowlite.com. And call us at 1-877-743-8857. We have the best solar advisers in the industry ready to help you. Stay sunny.