On August 19, 2015, the Cochin International Airport in Kochi, Kerala, India inaugurated a 12-MW, 50 acre solar array. This installation, in addition to the airport’s already existing solar capacity of 1.1 MW, makes Cochin the first airport in the world to be completely powered by solar energy.

This achievement represents a monumental step forward for India’s energy sector, which has experienced, and continues to experience, numerous issues.  With this project, and with future ones, the Indian nation is looking to integrate much more solar power into its electricity supply.  By taking advantage of the large available land area and extremely sunny climate for solar installations, India expects to provide a more consistent and far-reaching electrical supply grid for all of its residents. 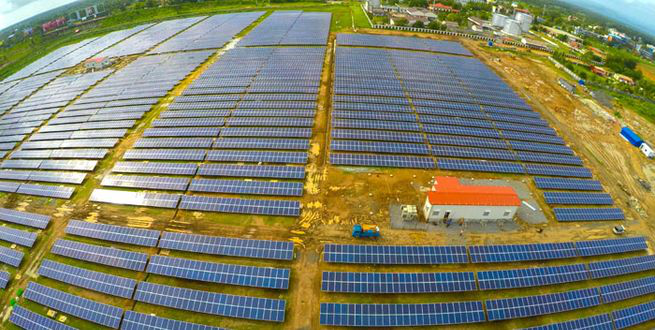 The Cochin Airport installation project took roughly 6 months, and cost $9.5 million US dollars. Consisting of over 46,000 panels, the array is expected to produce between 50,000 and 60,000 kWh of energy daily, which is much more than the airport currently uses. A Power Purchase Agreement (PPA) has been signed with the Kerala State Electricity Board in order to sell the surplus power back to the grid.

Along with the financial benefits (the system should pay for itself in energy savings within 8 years), this project has important environmental consequences as well. Over the next 25 years, the power station’s operation will save 300,000 tons of CO2 emissions. According to a press release published by the airport, that level of emissions decrease is equivalent to not driving 750 million miles, or planting 3 million trees.

While the Cochin International solar project may be the most noteworthy airport solar development right now, it is far from the only one of its kind. Because of the availability of wide open land spaces, and the proximity to a site of high electrical demand, airports present a great location for large-scale solar installations. The Airport Authority of India (AAI) is taking full advantage of these assets, having installed solar energy systems at 30 of its 125 airports, with bigger plans to come. There have been media reports of plans for a 15-MW solar farm at the Netaji Subhas Chandra Bose International Airport in Kolkata. This potential project would supply over one-quarter of the electricity needs for the facility, which is the fifth busiest airport in India in terms of passenger traffic.

In the United States, the Federal Aviation Administration’s (FAA) Voluntary Airport Low Emissions Program (VALE) has prompted airports across the country to reduce their carbon footprint. The FAA has helped fund 69 VALE projects since 2005, and just released a statement (link to 13) regarding $24.5 million in new grants going towards the improvement of 11 airports across the country.

India is a nation that shows not only some of the largest need for improved electricity generation, but also some of the greatest potential for solar power. Reports have indicated (link to 6) that between April 2014 and March 2015, the nation’s electricity demand exceeded its supply by 3.6%, and demand is projected to increase by over 5% in the next decade. In addition, a 2014 list of the top ten cities with the worst air pollution included six in India, including the top four on the list. Statistics and rankings like these are not good for the country’s residents or its reputation.

Luckily, solar energy may present just the solution that India is looking for. With more than 467,000 square kilometers of wasteland (180,000 square miles), and approximately 300 clear, sunny days each year, India seems like an ideal candidate for a solar energy makeover.

Current government officials seem to have the same idea in mind. Prime Minister Narendra Modi is looking to spark $100 billion dollars of investment in the Indian solar market from companies in China, Japan, Germany, and the United States. His goal is to increase solar capacity in India up to 100 GW by 2022 (from the current capacity of 4 GW). A growth of this magnitude would mean over 10% of India’s electricity nationwide would come from solar power.

In order to stimulate solar development, the government has ordered the state-owned utility to bundle cheaper, coal-produced electricity with more costly solar-produced electricity into one unit price. Projections indicate that solar could achieve grid parity by 2019, meaning the cost of producing solar power will be less than or equal to that of conventional sources. In addition to policy changes, a 750-MW solar plant is under construction in the Rewa district of Madhya Pradesh. Upon its planned opening in August of 2016, it will be the world’s largest solar plant of any kind.

India provides a great example of the potential that solar energy has to transform an entire country’s environmental and economic makeup. Airport installations and wasteland redevelopment turn previously unused plots of land into sites of large-scale electricity generation, which the nation of India desperately needs. However, the transformation process will not be an easy one. Fortunately, by undertaking and completing large-scale projects like those mentioned this article, India is taking many of the necessary steps to develop its vast solar energy resources.