Charging On The Go: The Developing Technology of Electric Vehicle Stations 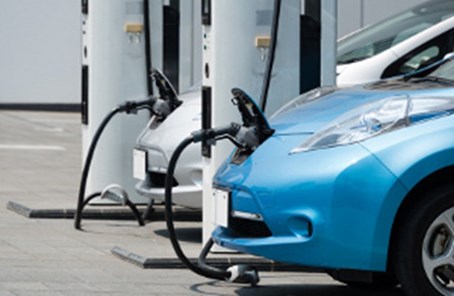 With the ever-rising popularity of electric cars, optimal methods of charging are always being sought after.  From a household outlet to a nationwide coordinated network, electric car charging stations are becoming more and more a part of today’s infrastructure.  Most of these stations are tied to the same electrical grid that powers buildings and households alike.  However, the recent development of solar charging stations allows EV (electric vehicle) operators to achieve complete climate-neutral transportation.

Charging stations can be installed as for use by a single household, a business, a city, or an entire country.  As EV’s become more prevalent on the roads, demand for charging stations to be an integrated into the community is on the rise.  Depending on the projected use of the charging station, different rates of energy supply must be considered.  The basic types/speeds of vehicle charging are discussed below.

Level 1 charging is the equivalent of plugging your car into a standard household outlet.  These chargers take between 11-20 hours for a full charge, depending of the range of the car.  In the case of a Nissan Leaf, this equates to about 4.5 miles of driving range per hour of charging.  While the 20-hour charge number may jump out at you, in reality, it is less of a limiting factor than one might imagine.  If the driver’s regular daily commute is less than 50 miles, a 10-hour overnight charge between uses would achieve almost a full recharge every night.  Since most EV’s have electric ranges between 40-100 miles, consistent overnight charging may not inconvenience a driver much at all.  For commuters who travel reasonably short distances on a daily basis, Level 1 charging should suffice.  However, on a longer voyage, different measures would half to be taken.

Level 2 chargers supply 240V, which is that of a dryer or an oven, and charge fully in 3 to 8 hours.  This is often the more popular choice for household stations because of the added convenience of being able to make a short trip on an hour-long charge.  For those drivers who do not always have 15-hour blocks of time to charge their car, this faster charging is necessary to avoid depletion.

In the case of both the Level 1 and Level 2 charging stations, the idea that a driver can stop off the road and quickly “fill up” the electric charge like at a traditional gas station is not achievable.  Instead, EV’s must be treated more like a cell phone, where the owner is always partially charging the car during breaks in their day.  While this mindset may take a little getting used to, with proper monitoring and management of the car, the difference in convenience can be negligible.

While household charging stations provide an acceptable option for individuals, a well-coordinated network of more powerful chargers could enable travelers to fully charge their vehicle while stopping for lunch, and possibly avoid the need for a household charger altogether.

Level 3 charging stations use much greater amounts of power to achieve a full charge in 30-60 minutes, as opposed to hours.  Stations this powerful are not really practical for household use, due to both their higher cost, and the rarity that a vehicle owner will make a very quick stop at home between long trips.  However, they are becoming more and more a part of public infrastructure. Also, DC Fast Charging is ideal for large vehicles with bigger batteries such as buses, or commercial fleets with little available turnaround time.

In 2012, Estonia became the first country in the world to install a nationwide DC Fast Charging network, which allows drivers to pay for a single charge or a monthly membership fee.  Other European countries are following suit.  A project to construct about 200 fast charging stations (roughly 1 station per 100 square miles) across the Netherlands began in 2013 and is nearing completion.  For comparison, the U.S. had 1,293 Fast Charging stations (roughly 1 per 3000 square miles) in January 2015, according to greencarreports.com.

One criticism of electric vehicles is that even though the cars themselves are not producing pollutants, they are being powered by “dirty” electricity (i.e., there are emissions associated with producing the electricity needed to operate the vehicles).  To help combat this issue, solar charging stations have been developed, many of which eliminate all ties to the grid and associated climate hazards.

Solar charging stations are a very recent development; the first standalone station was released by Envision Solar in 2013.  However, like many other solar technologies, these stations are rapidly improving.  So-called “smart” solar chargers operate much like a standard grid-connected household solar panel.  During the night, when many vehicles owners seek to charge, there is no solar energy available, so the power for charging is supplied by the grid.  When the panels’ peak production occurs during the day, the energy can be either stored in a battery or sold back to grid to offset energy costs.  A few California-based companies are even offering solar-powered DC Fast Charging, though this technology is not quite economically feasible for most vehicle owners.

As more and more EV’s find their way onto the roads, an efficient system of charging will become a necessity.  Whether this comes from a municipal effort to create a network as has happened in Europe, or through increased private (business/residential) charging options, convenient charging stations would have a great impact on reducing transportation-related emissions.  The addition of a solar option would make car travel completely carbon-neutral, an extremely impressive accomplishment.  While the technology and implementation of these different types of charging devices is still being refined, there is no reason not to expect a new standard of environmentally sustainable transportation.

Do you have more questions about solar energy? Contact YellowLite today. We're happy to answer any of your questions.

Sources critical to this article are hyperlinked within the text.  However, they are cited here as well:

In addition, the following was useful in researching types of charging stations: