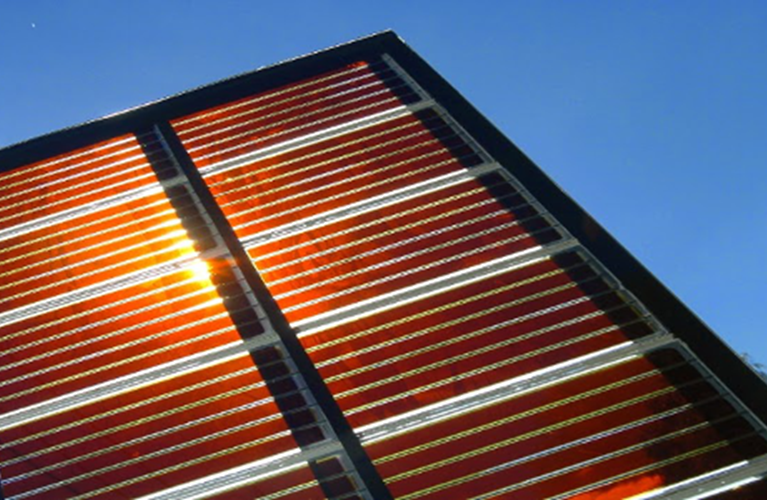 Many countries around the globe are striving to meet increased energy demand through the use of solar power. Accomplishing this goal requires a need for more and more efficient solar energy systems. As a result, researchers and engineers are constantly working to design and implement new and improved classes of solar cells, the primary element of solar panels and solar energy generation. Up to now, the standard solar cell has been silicon-based; silicon cells have served as a springboard to widespread solar applications. While silicon has proven to be a relatively inexpensive source material in the manufacture of cells, other materials have potential to be either more efficient solar collectors or even cheaper for large-scale production.

Perovskite cells are presenting photovoltaic developers with exciting new horizons in solar energy technology. Made via relatively simple manufacturing processes, and with readily available and inexpensive materials, perovskite cells have the potential to transform the solar energy industry. However, the key word is just that: potential. While perovskite materials possess certain excellent traits for energy generation, a few major issues relating to the size and durability of these solar cells must be addressed before they can become legitimate contenders in the competitive solar energy market.

Unfortunately, the challenge of limiting our global CO2 emissions is a race against time. As a result, investing resources in newer technologies like perovskite cells - which will certainly require additional development - may take a backseat to refining more well-established classes of solar panels. Regardless, perovskite cells remain a tantalizing opportunity for cheap, easy, and clean energy production.

What Is A Perovskite Cell?

The term “perovskite” refers to any material with the same crystalline structure as calcium titanium oxide. Materials with this crystal lattice organization, known as the perovskite structure, were first observed in the Ural mountains in 1839, and are named for Russian mineralogist L.A. Perovski. The generic formula for a perovskite material is ABX3, in which A is a large cation (positively charged atom or molecule), B is a smaller cation, and X is an anion (negatively charged atom or molecule) that bonds to both A and B.

The most common form of perovskite used in solar cells is methylammonium lead trihalide. In this material, the methylammonium cation (CH3NH3+) would be the ‘A’ referenced above, the lead cation would be ‘B’, and ‘X’ would be a halogen atom (iodine, bromine, or chlorine). In order to eliminate the need for lead, other perovskite solar cells have replaced the lead cations with tin, but these cells showed lower reported efficiencies.

In a recent report (highlighted later on in the Perovskite Research News section), perovskite solar cells were shown to have a much shorter energy payback time than traditional crystalline silicon (c-Si) cells. The energy payback time is a measure of the time it takes the panels to generate as much energy as was required to complete their entire manufacturing process, from mining and purify raw materials to installing the final product. Perovskite cells showed energy payback times of 2-3 months, compared to 2-3 years for silicon cells.

This advantage is due in large part to the simplicity of the manufacturing process used to produce perovskite cells. Silicon cells require being heated to more than 1000°C in a special vacuum-sealed cleanroom environment, whereas perovskite cells can be manufactured using relatively simple wet chemistry techniques in a standard lab. "Wet chemistry" refers to the process of mixing solutions in a laboratory, not unlike the straightforward methods used in school chemistry environments. These methods should be easily scaleable, allowing large quantities of perovskite cells to be produced for a fraction of the cost of other types of solar cells.

In addition to monetary advantages, there are certain physical properties that make perovskites unique in comparison to other materials used to harvest the sun’s energy. Most notably, the bandgap - the minimum energy of incoming radiation required to create an electric current in the cell - is controllable by the halide content. In other words, the chemical mixture of the material can be tailored to produce the maximum amount of energy when exposed to the sun’s radiation spectrum.

More details on the operation of solar cells can be found in previous YellowLite articles on multi-junction cells and thin film architecture, or at pveducation.org.

The main issues currently facing perovskite cells relate to their size and their durability.

Researchers have reported perovskite cells with efficiencies over 20% in lab settings, which is comparable to the current highest levels for crystalline silicon cells. However, the perovskite cells tested were only about one-tenth of a square centimeter - clearly nowhere near the area needed for an entire rooftop covering. When producing larger cells, defects in the film arise, greatly lowering the efficiency of the cell.

The ability of perovskite cells to withstand the outdoor elements is an equally significant present concern. The organic cation (‘A’ from the earlier section) is often water-soluble, meaning the devices are highly prone to degradation in rainy conditions.

Different techniques to combat each of these problems are currently being tested; two of which are highlighted in the following section. 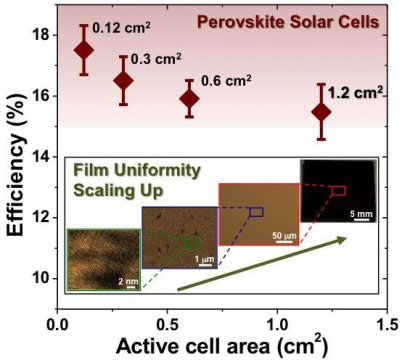 At the time of this writing, critical advancement have been made in the research and application of perovskite-based solutions. While this exciting technology may still be a few years off from competing with standard crystalline silicon on a large scale, its potential should not be ignored. Record efficiencies are rising at an impressive pace. The research mentioned above indicates that solutions may be within reach for the fundamental issues concerning perovskite cells. What sort of future impact these cells will have on the solar energy industry remains to be seen, however, the potential benefits are too great to ignore.