Batteries are becoming critically important to residential solar panel systems. Battery systems protect against power outages, provide economic protection to changes in state net metering policies, and increase the personal satisfaction of independence that comes from living “off the grid.” The addition of a battery storage system provides solar energy customers with several benefits. However, these come at a price. Just like any other purchase, their inclusion merits a cost-benefit analysis of the consumer. 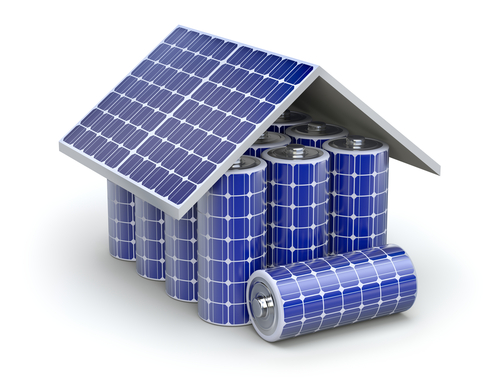 Because we encounter and operate such a wide variety of battery-powered devices in our daily lives, you might view the implementation of a solar-charged battery to be fairly straightforward.  However, construction of a battery that can withstand the rigors of solar energy storage presents certain challenges not posed by other battery applications with which we are more familiar, such as cell phones or car starters. In order to be practical, solar battery systems must be able to retain their capacity after years of discharging and recharging a great deal of energy on a daily basis.

Household solar batteries continue to see technological improvement. Different methods, materials, and approaches generate models that are in constant competition. Old standards like lead-acid batteries are becoming more refined while lithium ion is fast becoming more mainstream. We will then look at a few new processes that hold great promise.

The same basic battery that has been used to start automobiles for decades has long been the go-to option for solar energy storage. Lead-acid batteries are cheap, durable, and effective. Technicians are quite familiar with the required maintenance processes. While the chemical reactions involved are the same in both car and solar storage batteries, the differences in these applications require important variations in their construction.

Car batteries are only used to start the engine, after which they can be recharged by the alternator. For this process, the batteries are constructed with a large number of thin plates to maximize surface area, and therefore deliver a very large current for a short period of time. These batteries are known as shallow-cycle, or starting batteries, as they only discharge about 5% of the way.

Lead-acid batteries for solar energy storage are of a different variety, called deep-cycle. Each day, the battery will charge to near full capacity during hours of peak sunlight, then discharge a great deal (often over 50%) of its stored energy in order to provide consistent power during the rest of the day and night.  Contrary to the shallow-cycle version, deep-cycle batteries have larger, thicker plates that are more electrically durable. While deep-cycle batteries cannot deliver the short, powerful jolt of electricity required to start an engine, shallow-cycle car batteries would not withstand the repeated large depth of discharge necessary to power a home or business.

Within the family of deep-cycle lead-acid batteries, there are two main types: sealed and unsealed. The unsealed version may require regular refilling of the electrolyte, the conducting solution found inside the battery. This electrolyte evaporates into the surrounding area, which, if the battery is placed in an area with adequate ventilation (outdoors, for example) is not an issue.

If the battery is placed in a location with poor ventilation, or if regular maintenance is an issue, the sealed lead-acid battery is a better option.  With no evaporating electrolyte, no refilling is necessary.  Due to their decreased need for maintenance, sealed batteries may cost up to twice as much as their unsealed counterparts.

Lithium-ion batteries are gaining market traction. They have long been the standard for smaller electronic devices, such as mobile phones, laptops, and handheld power tools. Due to their light weight they have also found use in the transportation sector, particularly in electric cars and aircraft.

A more detailed cost-analysis of lead-acid and lithium-ion solar batteries is available at altenergymag.com.

Redflow, an Australian company, has done quite well in the solar energy storage arena with its zinc bromide flow battery.  A “flow” battery contains two solutions separated by a membrane.  This construct allows electric current, but not the solutions themselves, to flow across the divider.  "Flow" batteries also have shown longer life spans than traditional lead-acid batteries, but can be quite expensive due to the rarity of bromine in nature.

Nickel-cadmium batteries, commonly used in solar yard lamps, could perform well in a larger scale application. The limited availability and high price of cadmium currently makes it difficult for manufacturers to profit from this technology.

Researchers at Harvard have replaced the expensive bromine in the zinc-bromide flow battery with a non-toxic, non-corrosive ion called ferrocyanide. Though the researchers acknowledge that the new technology requires more testing before any sort of commercialization could occur, they believe their battery would be cheap, scalable, and safe.

While there are a variety of battery types that perform the task of storing solar energy from a solar power system, the lead-acid type remains the baseline for comparison due to its low cost. Lithium-ion batteries seem to show the greatest promise in everyday use, especially if the cost of production can decrease. Other battery types are still in the laboratory stages, but who knows what will be the next technology to emerge. Just like other renewable energy technologies, battery capabilities continue to develop at a rapid pace. And just like solar panels, battery systems will continue to improve. If a customer wants to find the most efficient solar panels, the best solar panels, or even get cheap solar panels for their solar power system, they are eventually going to consider a battery solution as well.