Annual Carbon Emissions Level Off, According To IEA 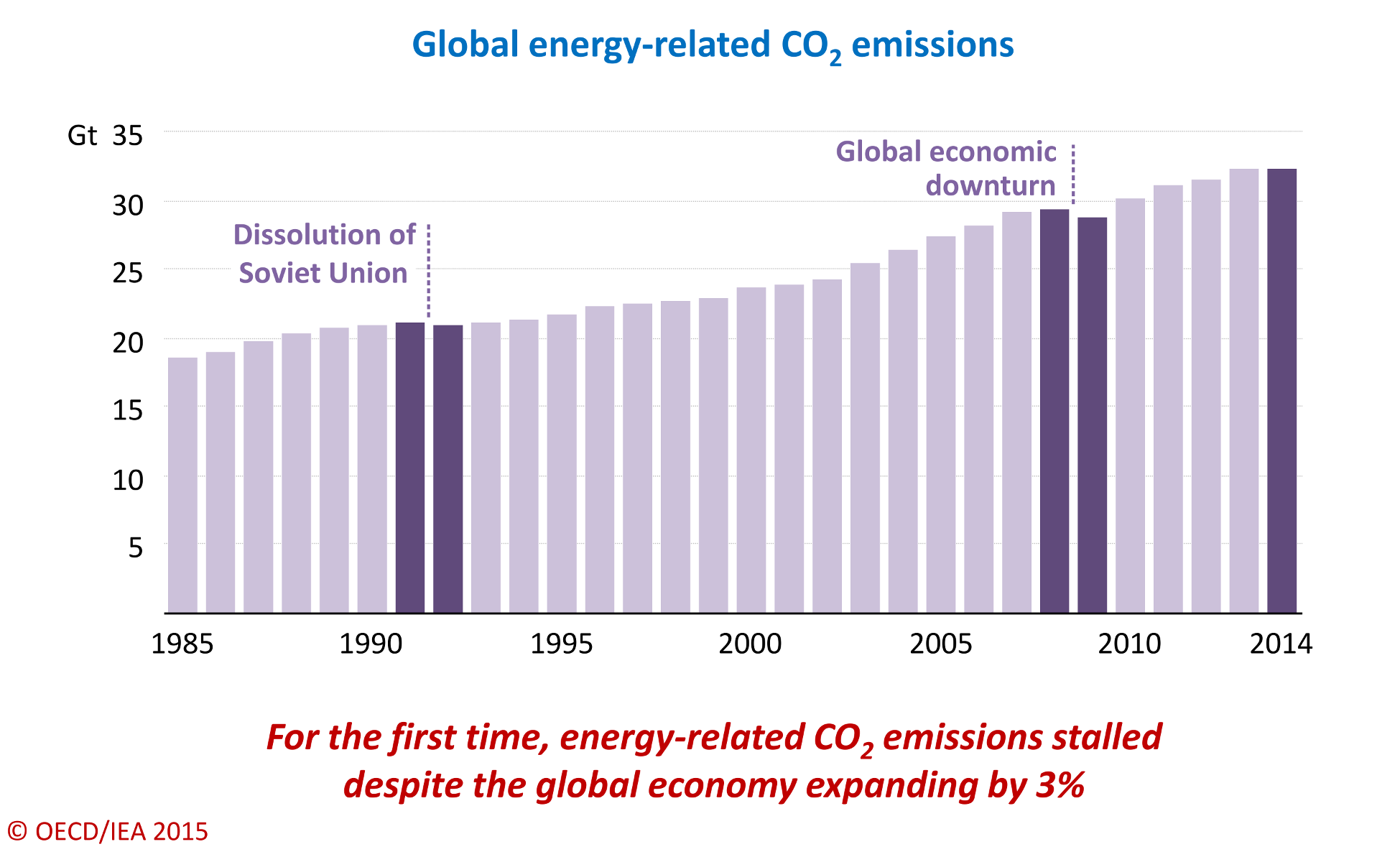 In March, the International Energy Association (IEA) announced that global carbon emissions in 2014 did not increase from their 2013 levels, remaining at 32.3 gigatonnes CO2 per year.  This is the first time that annual emissions have not risen in over 40 years.  The Renewable Energy Policy Network for the 21st Century (REN21) attributed this flatline to “increased penetration of renewable energy and improvements in energy efficiency,” as they described it in their 2015 Global Status Report.

Perspective on the Numbers

Scientists have predicted that irreversible and catastrophic climate effects such as rising sea levels, droughts, floods, and polar melting will occur if the average global temperature increases by just 2 degrees Celsius.  It has been calculated that this 2 degree change will result from accumulated global emissions reaching 1,200 gigatonnes of carbon (GtC).  More details on these calculations is available in the Global Carbon Project’s 2014 Global Carbon Budget.

In order to make sense of the different numbers being reported, it is very important to understand the units used to measure the amount of carbon present in the atmosphere.  Gigatonnes of carbon (GtC), the units reported by the Carbon Budget, are different from gigatonnes of carbon dioxide (GtCO2), used by the IEA and reported in the opening paragraph of this article.  GtCO2 accounts for the weight of the oxygen molecules present in CO2, while GtC only accounts for the carbon.  To compare, 1 gigaton of carbon equals about 3.67 gigatonnes of carbon dioxide.  Both are equally valid units for effectively measuring the amount of carbon present, but reports and publications may be unclear on which units are being used.

For the sake of clarity, I will use GtC for the remainder of this report.

The 2014 Carbon Budget states that the amount of carbon in the atmosphere has increased from 590 GtC in 1750 (pre-industrial era) to 842 GtC in 2013.  Now, if global carbon emissions remain constant for the near future at the 2013 and 2014 levels of 9.6 GtC/year, the 1,200 GtC threshold will be reached within about 37 years.  The hope is that global emissions will not only cease to increase, but soon will actually begin to decrease below their current levels - thereby slowing the onset of the predicted consequences.

Increase of Solar and Other Renewables

In order to achieve this goal, solar energy systems and other renewable power sources must continue to become more widely integrated throughout the world.  In 2014, fossil fuels remained a crucial part of our global power network.  However, the contribution from renewable sources continued to grow. 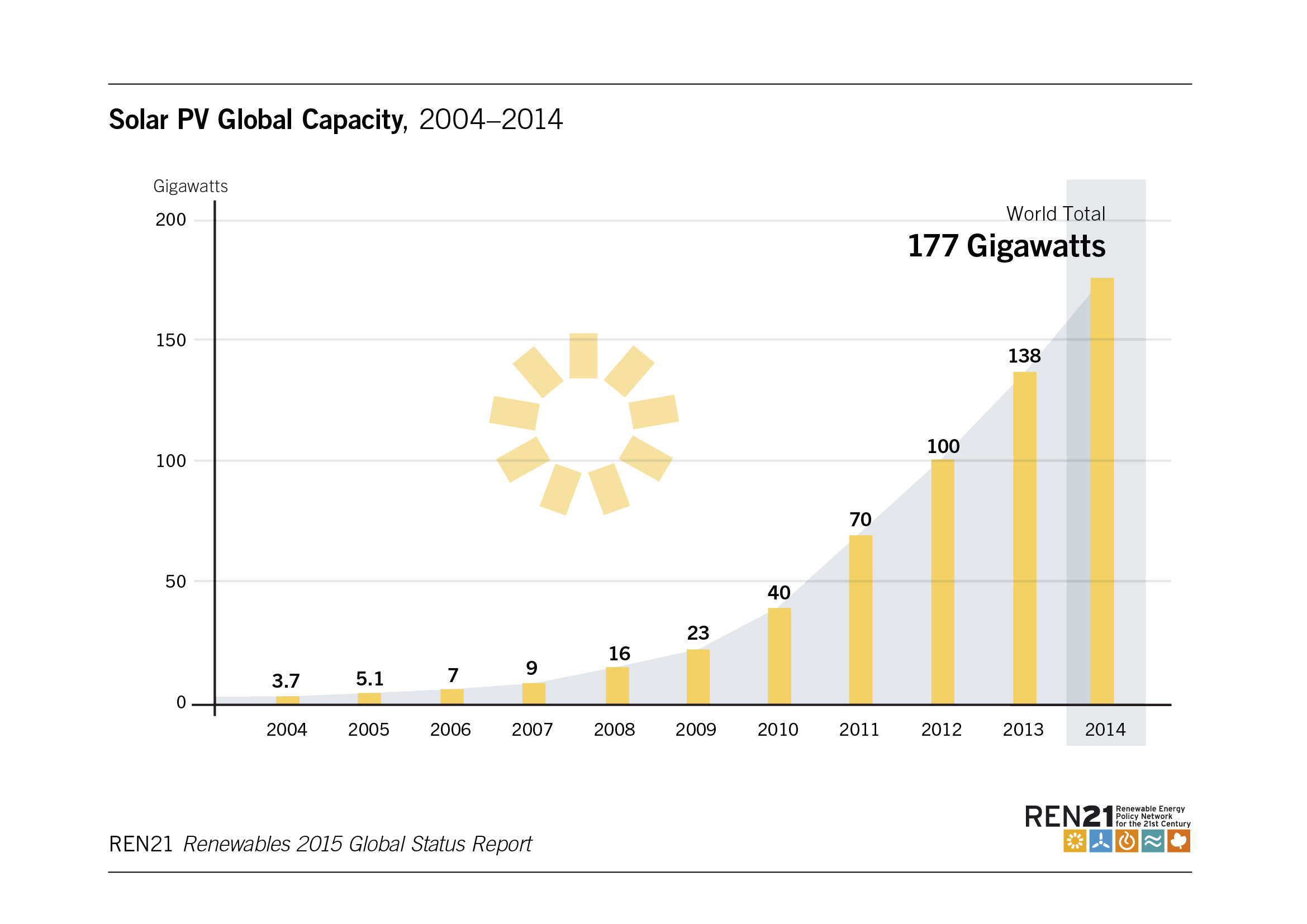 REN21 reports that approximately 59% percent of additions to global power capacity in 2014 utilize renewable power sources.  By the end of the year, renewables had enough capacity to generate an estimated 22.8% of global electricity, up from 21.7% at the conclusion of 2012.

Global solar PV (photovoltaic) capacity increased from 137 to 177 GW in 2014, representing about one-tenth of the previously referenced 59% renewable power capacity additions.  20 countries now have at least 1 GW of solar PV capacity, with China topping the list at an impressive 28 GW.  China generated about 25 billion kWh of electricity from PV in 2014, an increase of more than 200% from 2013.

Concentrated solar power (CSP) remains less prevalent than PV, but did experience a 27% increase in worldwide capacity (up to 4.4 GW installed) in the past year.  All CSP plants that came on line in 2014 were either in the U.S. or Spain, but planning and construction is taking place elsewhere.  In South Africa, four CSP plants totaling 300 MW were under construction in 2014, and a 160 MW plant in Morocco is expected to begin operating later this year.

While the 37-year timeframe referenced earlier is definitely a cause for concern, it should not imply a loss of hope.  Solar and other renewable energy generation systems continue to make drastic improvements, both in operation and implementation.  As worldwide carbon emissions remained constant from 2013 to 2014, global energy consumption actually rose slightly.  This provides some concrete evidence that renewable technologies, including solar PV and CSP, can generate reliable, clean, and affordable energy on a global scale.